Love is in the Air

“Each week Carry On Tuesday will publish either a famous quotation or a line from a book, song or poem and invite you to Carry On where words stop. You may use some of the words or all of them either at the start of your piece or within the body of your work.” 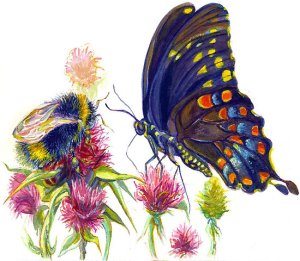 Love is in the air
Floating like a butterfly
Hopeful messenger
Is this real or illusion?
Stinging like a bee, wake up!

This is written in Tanka (or waka)  form. Tanka is an unrhymed Japanese poem consisting of five lines of 5/7/5/7/7 totaling 31 kana (Japanese units or syllables).

Tanka is generally written in two parts. The first three lines is one part, and the last two lines is the second part.

Tanka in English is relatively new, so there are not as many guidelines as with haiku and senryu.

Becca is an artist, poet, and animal communicator. She delights in cooking, nurturing, and sharing a rich spiritual life with others on the Path.
View all posts by becca givens →
This entry was posted in Tanka and tagged "all is one", awakening, bees, butterflies, Carry On Tuesday, direction, Divine, illusions, inspiration, journey, lessons, life, love, Muhammad Ali, Quotes, reflect, spirituality, tanka. Bookmark the permalink.

21 Responses to Love is in the Air