For the 4th of July, my hubby and I met some friends at Lake Whitney.  The day was sunny and HOT.  There was a wonderful breeze, and it negated the warmth of the “Texas in July” day.

Greeting the arriving and growing crowd was an enthusiastic male black lab with a bright yellow collar and a bright yellow ball.  He tirelessly played fetch for hours upon hours.  Since the kids and teens were busy with summer fun and jet skies, no one was paying attention to the amount of time the lab was running and playing fetch without stopping; he moved from one willing participant to another.  He did not seem to tire.

Moving among the crowd, the lab found a young boy to play fetch with him for nearly 30 minutes.

The morning passed … filled with laughter, fun, jet skiing, bright blue skies and sunning.  The long line at the lake’s shore finally yielded Ray a turn on the jet ski.  He and a friend enjoyed the circles around the lake, spinning, splashing and showing off … that is until he lost his hat.  😦  In retrieving his hat, he and Joi toppled the jet ski and flooded the motor.

Fortunately, a mechanic was on hand to assist in draining the motor to get it back to working order.  It took awhile but success leveled up.  The mechanic boarded the jet ski for a test run.  Suddenly, I realized the human companion to the lab was the mechanic.  As soon as the ski took off, the lab dropped the ball and came to complete attention watching and waiting for his human to return to shore.  As soon as the lab’s human returned to shore, he resumed playing fetch with whomever would throw his yellow ball. 😀  I am positive he slept very well that night with a smile on his face. 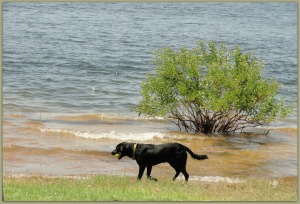 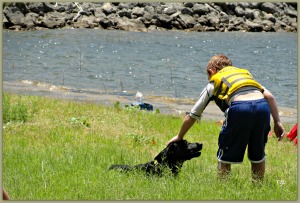 I stumbled upon Mellow Yellow Monday, whose specialty is all things yellow. Intrigued, as yellow is my favorite color, I decided to interject some “sunshine” for the winter months.  With approaching spring, I still enjoy the weekly boost of yellow — so I will continue with Monday Sunshine.

Why not join in the sunshine fun?

Becca is an artist, poet, and animal communicator. She delights in cooking, nurturing, and sharing a rich spiritual life with others on the Path.
View all posts by becca givens →
This entry was posted in Animal Talk, Photos and tagged boy and dog, labrador retriever, man-animal bonds, Mellow Yellow Monday, nature, photography, playing fetch, yellow. Bookmark the permalink.