I realize I’ve posted Occupy Blogosphere today, but I did not want to wait until next week to share this!! 🙂

If you are connected to Facebook, there is a good chance you have seen this photo circulating, “just about” at the speed of light.  The story is heartwarming and personal – not only for John Unger and Shoep, but with the world. 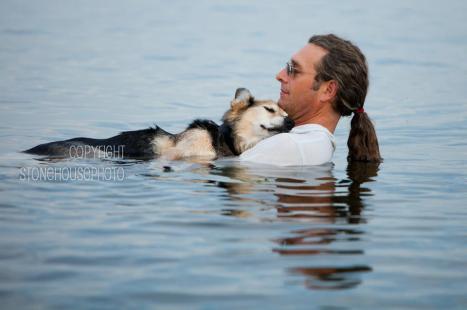 “This 19 year old Shep being cradled in his father’s arms last night in Lake Superior. Shep falls asleep every night when he is carried into the lake. The buoyancy of the water soothes his arthritic bones. Lake Superior is very warm rightnow, so the temp of the water is perfect.I was so happy I got to capture this moment for John. By the way, John rescued Shep as an 8 month old puppy, and he’s been by his side through many adventures :).”

To date, the photo from Stonehouse Photography Facebook page has been “liked” over 290,700 times, and “shared” over 174, 000; over 31,000 people have left comments.  This does not count, the shares, likes and comments by those who shared and liked (from their posts).  I noticed it on the page of a friend from Romania.  I followed the breadcrumbs to find the photographer’s page — and I backtracked through at least 3 or 4 other shares to discover the original.  With an multi-animal household, half of which are elderly, and being an animal lover, I have been following the story ever since.

In a short span of time, an article was written for the Duluth News Tribune, TwinCities.com, then picked up by The Huffington Post.  Yesterday, Hannah of Stonehouse Photography posted she was fielding calls from CNN and The Weather Channel, and today I found a link to Fox News piece.  John Unger, indicates he is repaying Shoep for saving his life nearly 19+ yrs. ago.  In the midst of the love fest with Shoep and John, anonymous donors enlisted Laser Therapy for Schoep at the Bay Area Animal Hospital in Ashland, Wisconsin.  This treatment is an effort to assist Schoep with pain management.

Hannah, the photographer, indicated she would post additional photos from the session once she returned home.  However, this was before the first photo went viral.  I do not think she has caught her breathe yet.  It is amazing how the spirit continues to unfold.  While she gives her readers permission to use/share the image, she  setup a site to buy a professional quality photos of Schoep and John from Stonehouse Photos. 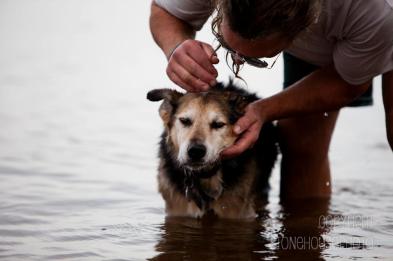 “Unger said he has heard from people in Hungary, Russia, the Czech Republic, Poland, Norway, Sweden, Germany, Great Britain, Mexico, Colombia, Guatemala, Australia, New Zealand and “places I had to look up because I had no idea where they were.”

Sharing with my readers for “Occupy Blogosphere – Thursday”, initiated by Amy of SoulDipper  to “give this planet a much needed shot of fun, support and positive energy” …

Becca is an artist, poet, and animal communicator. She delights in cooking, nurturing, and sharing a rich spiritual life with others on the Path.
View all posts by becca givens →
This entry was posted in Animal Talk, Random and tagged dogs, elderly pets, John Unger, man-animal bonds, Occupy Blogosphere, positive, Schoep, Stonehouse Photography, uplifting. Bookmark the permalink.