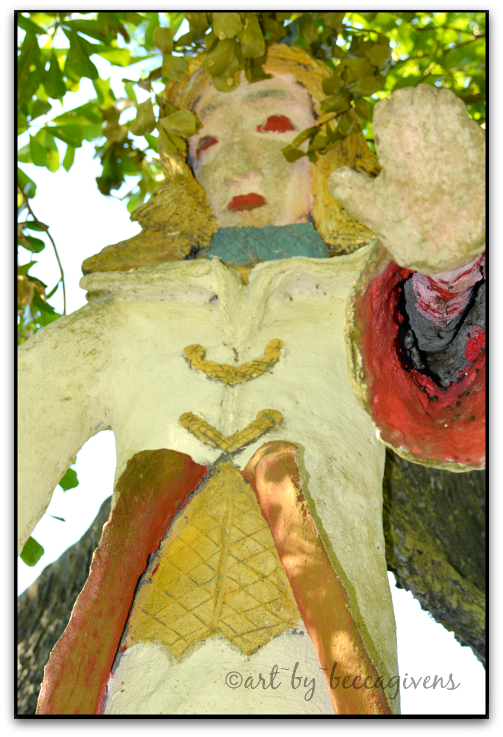 Kenny Hill, a bricklayer by day, and self-taught artist by evening and weekend, created over 100 pieces of sculpture out of cement and wire mesh.  He was a private man, and the folk art pieces he created were not meant for anyone’s eyes but his.  It is said he denied interviews and photographs.  Not much is known about him, other than he started working on this folk art world in 1989 – 1990.  He began transforming his shaded bayou environment into a mesmerizing chronicle of the world as seen through his eyes.  There is a profound mixture of Biblical reference, with bright Cajun colors and stark black, with evident themes of pain, inner struggle, conflict between good and evil.  A message of salvation is intertwined throughout the pieces.  He has figures of black and white, male, female, a child, soldiers as well as many self-portrayals.  All of the pieces are guided, supported or lifted by various versions of angels.  Some of the angels seem celestial, some inviting while others seem daunting.  Towards the back of the garden is the most prominent piece in the garden … a lighthouse. It is 45 feet tall, composed of 7,000 bricks, with figures clinging to the outside: cowboys, soldiers, angels, God, and Hill himself.

In January 2000, after having a disagreement with the local parish, Kenny abruptly left the site and area.  When visitors discovered his absence they found a hand painted message above the kitchen sink: “HELL IS HERE, WELCOME.”

Committed to the preservation and conservation of art environments, including self-taught artists, and important collections nationwide, the Kohler Foundation purchased and preserved the land which included the garden. The site opened to the public in 2002.  The Foundation gifted the garden to nearby Nicholls State University in Thibodaux, Louisiana.

Becca is an artist, poet, and animal communicator. She delights in cooking, nurturing, and sharing a rich spiritual life with others on the Path.
View all posts by becca givens →
This entry was posted in Photos and tagged Mandarin Orange Monday, Monday Mellow Yellows, orange, photography, yellow. Bookmark the permalink.